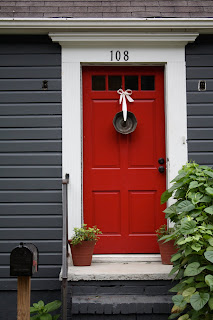 Slowly the house is getting painted. Slowly. As is, it's too d**m hot to paint unless the area you are painting is in total shade. So we have to wait until the areas we have ripped the siding from are shady and squeeze in a half hour or so of painting.

After getting as much of the back of the house that we can reach sans scaffolding siding free, we decided to move onto the front. The sides are going to be scary. One is taken up mostly by the mudroom which we have already discovered has no siding, which, um, we're not sure what we are going to do with. I'm voting for shingling it and then leaving the shingles unpainted to add some more interest to the house, Will seems to have some other idea in his head which he hasn't fully explained to me. I know it involves busting out one whole wall but beyond that, I can see his gears working but am not sure to what end. Thus is life with an architect. The other side is flippin huge AND covered with all sorts of connections to wires, phone lines, unused cable ports etc which we need to figure out how to handle before we can tackle. Plus we need some serious scaffolding over there. So the front it is.

I kinda dig that actually. As Will says, it "signals our intentions" I think that's architect speak for -let's the neighbors know why it is that we have a huge pile of siding out front and seem to spend most of our spare time in nasty paint clothes. 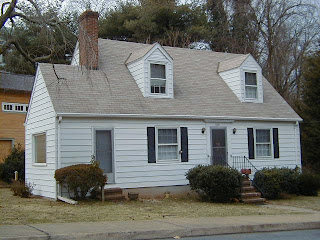 The color has turned out just what we wanted. It's a sort of "is it gray, is it blue" shade that looks different in different lights. Our only issue now is that, as former bungalow dwellers, we are used to a house having no less than FOUR colors. One for the main part, one for the trim, one for the inner parts of the window (mullions, sash etc), and one for the door. And sometimes a different color for the foundation, although it's usually the same as the mullions. It sounds like a lot but trust me, if you drive around bungalow neighborhoods in Portland, you'll see that the houses that you think "now that one I like" have four colors. 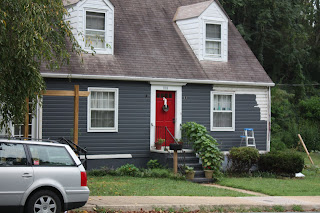 But Cape's? Not so much. We tried a different color on the foundation and it looked weird, we tried a different color on the windows, weird again. I think it's just the houses cape-ness, we need to embrace it and go with the blue (gray) on the house and white one the trim. And something fun on the door. Cant decide if the red is a little too Americana or not. We are, after all, living in Mr. Jefferson's hometown, so there's a lot of Americana here... but the door may change, Will is thinking Mustard, I think that may be too much like the kitchen but what they hey.

Today it's gray and overcast and almost "gasp" cool, so if we can get our work in and our last day before school starts fun in, we might get that last little bit of the front done before bed tonight. Also need to tackle the white, The bottom board is going to be white to make a break from the house and the foundation, I kept accidentally painting it. Whoops. Also have to get up to those dormers which look really weird and bright now. And ugg, roof, need new roof! AHHHHH so much to do.....

What do we think? Any comments on door colors?
Posted by Gillian
Labels: renovation
Newer Post Older Post Home

Time changes everything, as Thomas Hardy once said. Children grow into adults, seeds grow into trees, mommy blogs turn into a shared writing space between a father and daughter. A challenge for two people to write about the same topic and see where it flies.

Humm, Where Did I Read That?