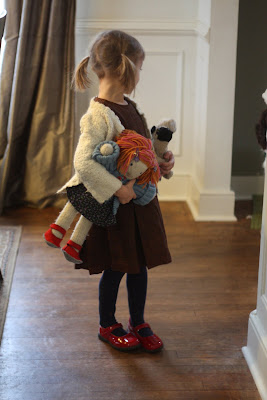 ** I've redesigned Eliza entirely for my new pattern company! Please come meet Eleanor!**
Her name is Eliza, unless, of course, Evie is in a name changing mood, in which case her name, and the names of all of her dolls, change by the minute. Most of the time though, she is Eliza. I'm not sure where she got that, maybe it's all the hours of listening to show tunes in which My Fair Lady plays a significant roll. 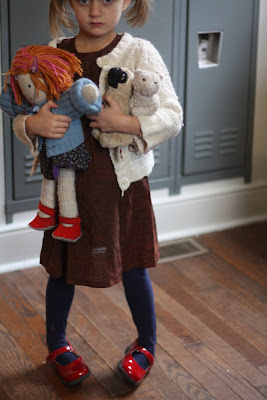 She goes most places that Evie goes these days. To school, to the library, to wherever- tucked under her arm or buckled into the seat next to her in the car, in their matching shiny red shoes, Evie's from one grandma and Eliza's from the other. 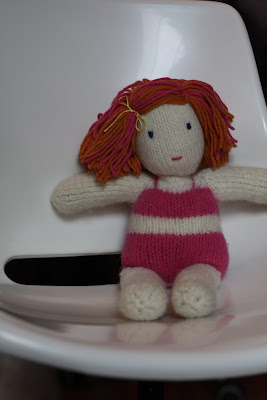 I've been meaning to post a tutorial for the doll I knitted for Evie for a while but my notes disappeared sometime over Chirstmas(ack!). Thankfully they turned up yesterday in Briton's backpack (why? Eight year old boys are such pack rats!) When I started this doll I had a pattern from Pick Up Sticks but that pretty quickly turned out not to be what I wanted. The head was too small proportionally for what I had in mind and even knitting it with bigger needles wasn't going to work. Instead I just started knitting and hoped for the best, changing things as I went until I ended up with a size I thought would work.

This doll needs to be lightly felted to work. The felting both fuzzes the increases and decreases on the head so they aren't noticeable and also allows you to stuff the head without ripping your knitting, the felting shrinks the knitting around the stuffing to create a tight, slightly weighted head and body, much like a Waldorf doll.

*Edited to add*
Yay! The Eliza pattern has been published in the Winter 2012 issue of Living Crafts Magazine. You can purchase a digital copy of the magazine here! Have fun knitting!

Make the hair:
Find a book about 5 inches wide and 1 inch thick. Wrap the hair colored yarn around until you have a solid layer about 5 inches across. Cut a strip of masking tape long enough to tape across all the yarn on the binding side of the book. 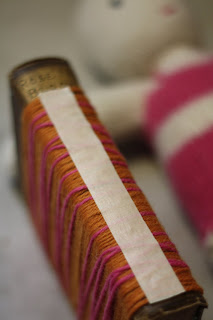 Cut along the opposite edge of the book from the tape to create a flat layer of yarn strips with tape down the center. You'll need to create two of these and a third smaller one if you want a side part. 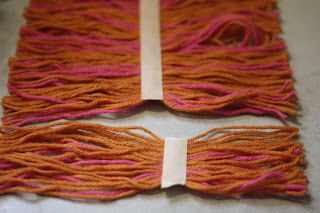 With your sewing machine, stitch down the center of the tape on each piece of the "wig". 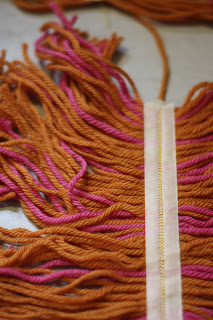 Remove the tape and, using the yarn needle, sew one of the larger "wig" pieces down the center of the head. Stitch small bunches of hair around the base of the neck, starting closer to the "ears and working down around the back. 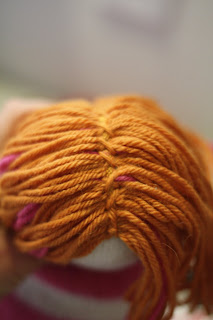 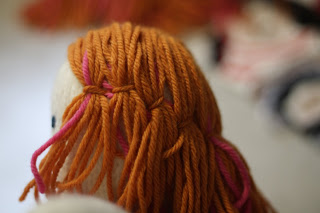 Sew the second layer of the "wig" over the first, without stitching down the back. Setting the smaller piece just off center to create a side part, sew this in place as well. 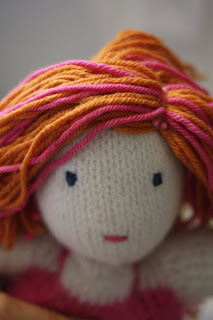 Trim the hair to an even length. 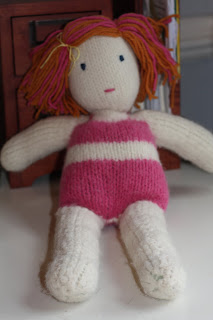 Most 18 inch doll clothes and doll clothes patterns will fit this doll so you can hunt around for clothes and patterns or just jump in and make some simple clothes on your own. Have fun!
Posted by Gillian
Labels: knitting, tutorials
Newer Post Older Post Home

Time changes everything, as Thomas Hardy once said. Children grow into adults, seeds grow into trees, mommy blogs turn into a shared writing space between a father and daughter. A challenge for two people to write about the same topic and see where it flies.

Humm, Where Did I Read That?